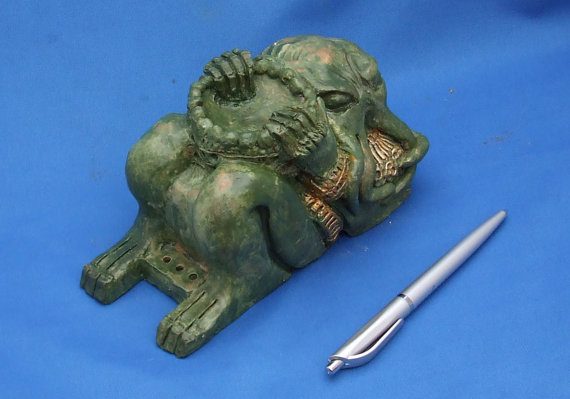 The original of this intriguing artefact was allegedly discovered during one of the excavations carried out at Teotihuacan during the period 1917 to 1922 under Manuel Gamio. For an undisclosed reason, it was never entered into the catalogue of finds, and later found its way into the Pickering Collection in Miskatonic University, sometime in the 1940’s. There is however, no independently confirmed information on its provenance.

It is unlikely that it would have been identified as a Cthulhu-related artefact at the time, as academic attention was not really aroused to the existence of his cult until 1928, when it was first revealed by H. P. Lovecraft.

Chac-Mool is the name given to a type of Pre-Columbian monumental stone statue. The Chac-Mool normally depicts a reclining human figure with the head up and turned to one side, holding a tray over the stomach. The meaning of the position or the statue itself remains unknown, but it may have been some form of sacrificial receptacle. This Chac-Mool is a life-size replica of a miniature example, possibly intended for a private shrine.