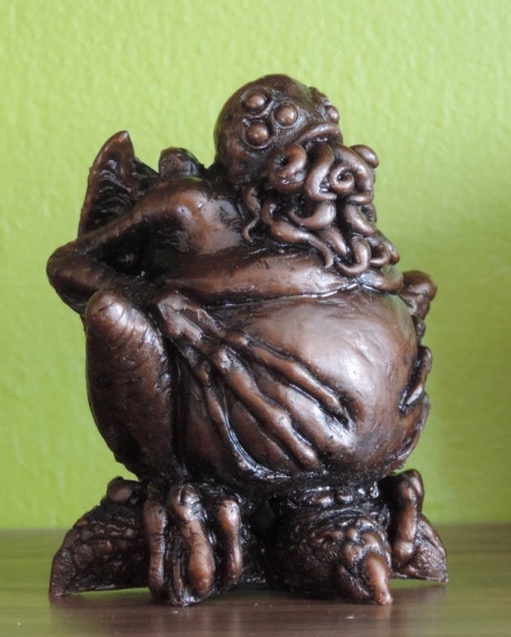 Many of our clients ask for any artifacts or objects directly related to the 1928 Federal raid of Innsmouth Massachusetts. Every now and then we are lucky enough to find these objects.
During the forced evacuation of the town (just prior to the bombing of Devils Reef by the Navy) Federal agents went door to door collecting the protesting natives, and any items of an occult or subversive nature that could be used as evidence at a later date. Tabletops and dressers were emptied into boxes, labeled and thrown into trucks for sorting later.
We know that a common item in most Innsmouth households was a small bronze effigy idol of some loathsome sea monster or god. We found a report from the raid wherein an agent commented,
“…during the raid they (the idols) were found on tabletops, next to beds, or in special house “shrines” with foul smelling incense and votive offerings. The inhabitants became very agitated when these items were unceremoniously removed from their homes, even as they rest of their possessions were piled into boxes. The people kept croaking out ‘Klutu, Klutu’ or something like that…”
Our Company has come into possession of one of the lost boxes from the raid. Though the outside of the box was too water damaged to read, the inside held the personal effects of a woman: This Effigy Idol, a wig, oddly sized jewelry, shells, coral, and antiquated clothing wrapped in a salty, reeking ball.
We feel more of these boxes will come to light, with more rare and unique items. For now, though, we offer you this intimate worship effigy. It is a piece of the mysterious deep that no one in Innsmouth felt at home without.