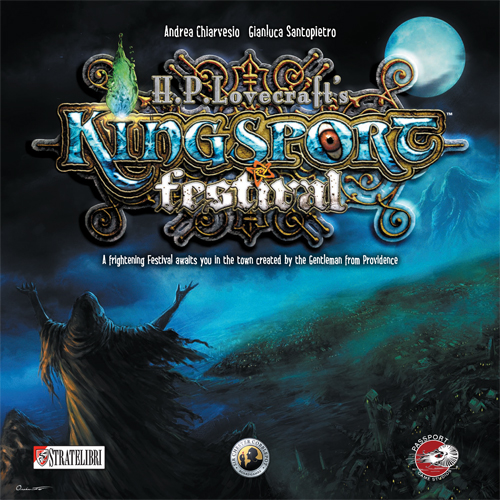 In the unimaginable darkness of Kingsport, silent wanderers are called to a profane celebration. Their goal: to invoke unthinkable horrors! A dread terror that is not of this world or any other — but rather from the spaces between the stars — demands your submission. Meanwhile, unwary investigators vainly attempt to halt this appalling chapter in the dark history of Arkham.

As the high priest of one of these shadowy cults, you must dominate the city. You will invoke cosmic creatures and unholy gods to receive their “gifts”, but you must take care to preserve your sanity and thwart the investigators who seek to stop you. This time, you are the bad guys. Why settle for the lesser evil? Kingsport Festival, a game of bizarre cults set in the terrifying world of Howard Philips Lovecraft, lasts 12 rounds, each divided into six phases. All Cultists roll their dice and the one that rolled the lowest sum will play first and so on, then (in turn order) each one may invoke an Elder God by using one or more of his dice, where the sum of their values is exactly equal to the number of the Elder God, or pass. Once all the dice are placed or players have passed, in ascending order, the Elder Gods give their gifts to the Cultists who invoked them: the Cultists may have to lose Sanity points to receive the rewards. After Cultists have taken their dice back, in turn order each one may place his disk on one Building that is connected to another one he has already marked (starting from the House). To do so, he must pay the Domain resources required.

In turns marked with a blue marker on the Calendar, a Raid takes place: first the Event card and then the Investigator card is revealed. Each Cultist calculates his Strength by adding up any modifiers he has due to Spells, Buildings, and other game effects (such as Events, Scenarios, etc.). If his strength is greater, the Cultist receives rewards; if is less, he suffers the penalty.

The game ends after the twelfth round is played. If the Scenario has a Festival card, it is revealed and its effects resolved at this time.
The Cultist who has the most Cult points is the winner.

Text from Board Game Geek.