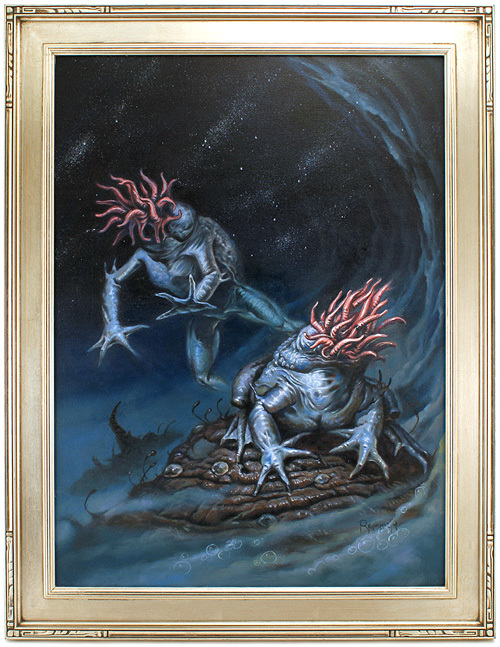 Acrylic on canvas. By Jeff Remmer, exhibition “At the Mountains of Madness: A Tribute to the Writings of Lovecraft”

Jeff Remmer has been fascinated with the macabre ever since an early age. Among his influences, which included his mother’s interest in science fiction, horror and fantasy movies, were the Warren magazines in the sixties: Creepy, Eerie, and Vampirella. It was from these books where he learned pen and ink, ink wash, pencil and how to make the unreal look real. After he realized that he wanted to become an artist at the age of fourteen he pursued an art education at the University of New Mexico in the Fine Arts program and then continued his education with Lela Harty, John Asaro and Ron Lemen among others. For the past 17 years he has worked in the video game industry as an art lead and senior environmental artist for Sega, Sony, and others. He created illustrations for various publications, card companies, as well as video game companies. In addition to fantasy painting he enjoys plein-air painting. He had gallery shows of his landscapes and seascapes in various locations including Southern California.