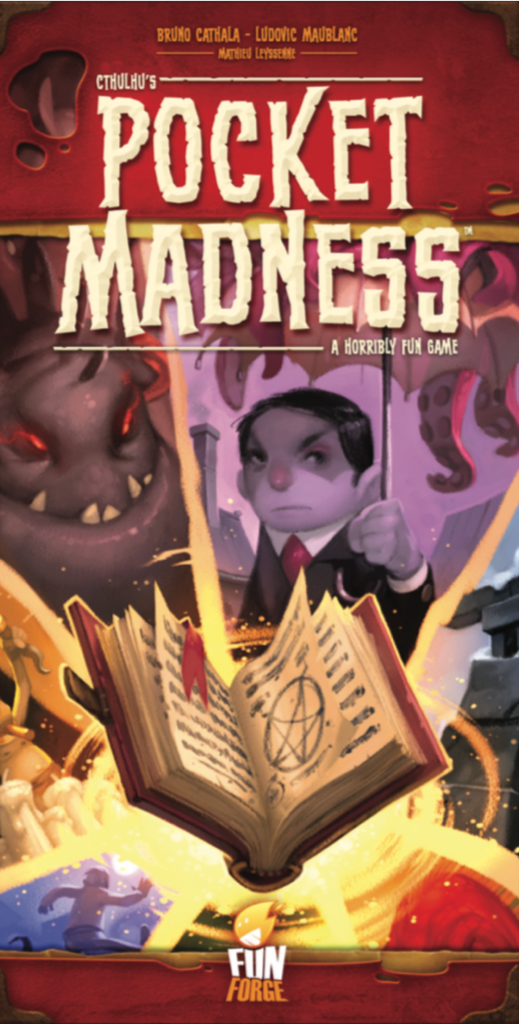 Pocket Madness is a fast-paced card game inspired by the writings of H.P. Lovecraft, known worldwide for his short story “The Call of Cthulhu”. In the game, you evoke the powers of the Ancient Ones to drive your fellow cultists mad while securing your path to victory. To play, you first deal each player two cards from a deck that contains cards numbered 6-12, then you count out 17 face-down cards, flip the remainder face up, shuffle the deck, then lay it out in a row so that all players can see the cards.

On a turn, you either take 1-3 cards, open a portal, or open an investigation. When you take card, you pick up the first 1-3 cards in the row, then add them to your hand. To open a portal, you lay down three or more cards of the same type, then take the portal matching the number on those cards. Each portal has a different power, and you can use any one portal power on your turn. If someone else claims a portal that you own, too bad! You just lost the portal! To open an investigation, discard cards numbered 6-12, after which every other player gains as many madness tokens as the number of investigations this round.

A round ends when one player runs out of cards or the card row runs out. In the latter case, everyone takes one final turn, then all players gain madness tokens equal to the number of different types of cards in their hand. If a player empties their hand, that player loses half of their madness tokens while everyone else gains one.

The game ends the round that a player has collected ten or more madness tokens.