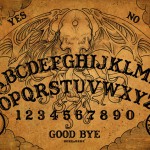 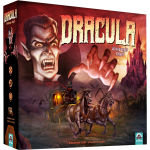 Necronomicon is a playing cards game for 2 to 4 players and 60 minutes. Second edition with new artwork by François Launet (Goominet).

Read about how to play in the description below.

Necronomicon is a playing cards game for 2 to 4 players and 60 minutes. Second edition with new artwork by François Launet (Goominet).

How to play
The objective of the game is to complete the Necronomicon. Each player is dealt five cards at the beginning of the game. Each card represents part of a section of the book. Each section of the book is completed by collecting at least 5 cards from that specific section, identified by a symbol. The game is divided into several rounds, each of which ends when a player manages to complete a certain number of sections of the book (each round will be more complicated than the previous one). The complete sections of the book are marked with tokens until the Necronomicon is completed and the game is won.

During a turn there are only two moves: draw card (to choose from the deck or the discard pile) and perform an action by placing a card on the table, which will serve to bring new cards into the hand or to get rid of others mainly. You’ll have to decide whether to sacrifice an important card to take advantage of the card’s action or to play more conservatively. The card that is played on the table is available for the next player, who in turn will decide whether to draw it or take a new one from the deck. The turns are fast but must be played with caution, since when completing the sections of the book can not remain cards in the hand, as they will lose sanity if another player ends the round earlier. The rounds follow each other until all the sections of the Necronomicon are completed and the game is won.